Where Is The Isle of Man

The Isle of Man is in the middle of the Irish Sea, sandwiched between Scotland, England, Wales & Ireland. On a map, you’ll find us at 54.15º North 4.48º West. The Isle of Man is one of the thousands of islands that make up the British Isles. 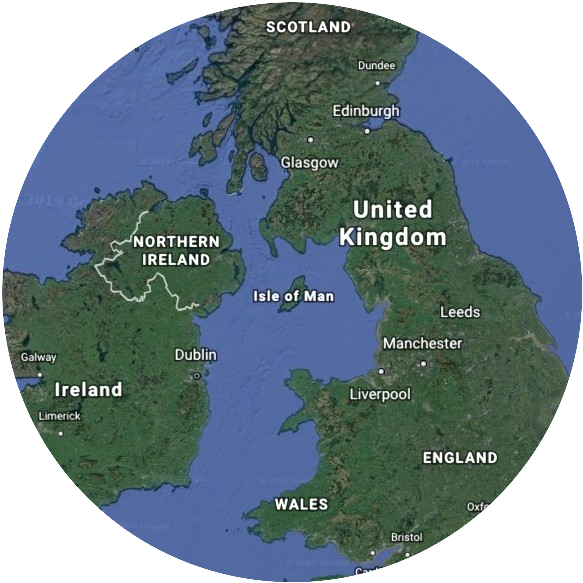 The Isle of Man is NOT part of the UK. It is a Crown Dependency and is self-governing. The Isle of Man government or Tynwald has been in continuous existence for over 1,000 years, which makes Tynwald the oldest parliament in the world with an unbroken existence [citation – Tynwald Government Website].

The Isle of Man TT Course

The early TT course was 15 miles, starting from St Johns, east to Ballacraine, where the route turned left, heading north on what is now the present TT course as far as Kirk Michael, where the path would then turned left again, back along the coast road to Peel, turning left for the final run back to St John’s. In 1920 the route was changed to the present 37-mile course and had altered little in all that time. Initially, the course was 37.43 miles, and now the course stands at 37.74 miles.

When is the Isle of Man TT Held

Traditionally, the TT is during the last week of May and the first week of June. This year (2019) the first practice race is on Saturday 25th May, and the festival ends with the Blue Riband Senior TT on Friday 7th June.

The first week is taken up with practice races, which is fun. These practice seasons run in the evenings, so I usually get to watch some of these after work. Race week is the second week, and these races take place during the day. If I don’t take the day off, I don’t get to see the events, but quite often I walk around the corner from the office where I can watch the bikes approach May Hill.

Past Winners of The Isle of Man TT

A Taste of the TT

Trike Tours Around The Course

For Baby Boomer Bikers and non-Bikers alike, if the thought of riding a bike again is just not an option, then how about a pillion ride on a Trike Tours – purpose-built Trikes? With the knowledgable rider doing all the work, this leaves you and your partner sitting in the rear two seats to survey the views and take in the atmosphere while the rider gives you a running commentary over the radio!

How Do I Get to The Isle of Man

This year (2019) sees the commencement of a new route to the island from Heathrow Airport; the powers that be have been talking about this for many years, we were giving up hope that this was never going to happen, but, it did!

If you don’t want to fly, why not book a cabin on the Ben Mcree, sailing daily from Heysham, Lancaster or the fast-cat, Manannan, from Liverpool, which also sails daily (Weather permitting!).

I can’t mention the TT without mentioning Bushys Beer Tent. What would TT be without this iconic brew? The Bushys Beer Tent moved last year from Douglas Prom to the Village Marina Gardens. For all you good soul dudes out there you cannot miss the “Mad Sunday” 29th May at the Bushys TT Village (the Beer Tent as it is now called) for the Sunday Soul Extravaganza with some great 60s Soul,  Tamla Mowtown, Ska and Reggae.

Walking The Isle of Man

There are many short walks across the island and many beautiful glens. Here are some of my favourites.

Bishopscourt Glen – My Nearest and Dearest!

Bishopscourt Glen is a popular walk for those that know of its location – OS SC330924. The Bishop of Sodor and Man, who resided at Bishops Court,  initially owned the 5-hectare glen. The National Glens are protected and managed by the Forestry Amenity and Lands Directorate of the Department of Environment, Food and Agriculture. 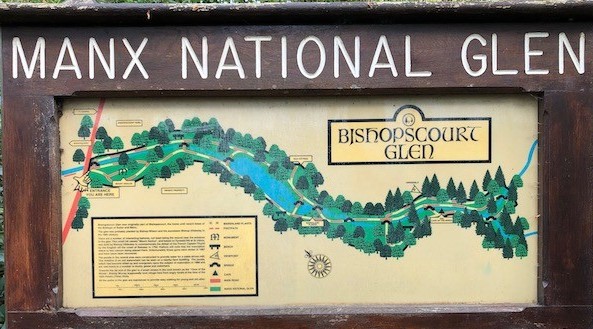 The small lakes were created over time and go back to the early 19th century. Close to the entrance of the glen is a large mound, named Mount Aeolus, built in the 18th century to commemorate a Captain Elliott, who won a battle with the French off the Manx coast on 28th February 1760.

The woodland is a mixture of hardwood and shrubs. The ponds are home to a flock of ducks. In the spring the woodland is carpeted with bluebells and wild garlic. The walking is level and secure.

The Curragh – Home of the Manx Wallaby

The Curragh is in the north of the Wildlife Park – OS SC365950. There are easy walks in and around The Curragh. If you venture there dawn or dusk, it is likely that you will see the Manx Wallabies.

Two wallabies escaped from the Wildlife Park in the 1970s. There were never captured and started breading. Along with further later escapees, the population is now in The Curragh at around 120 and growing!

The Curragh is also home to six species of wild orchid, which includes the Heath Spotted Orchid.

There are two long-distance paths. The first is the Millenium Way, which runs from north to south for 25 miles, starting in Ramsey, and cuts through the high fells, and ends in Castletown. Experienced walkers can complete this in a day.

The other long-distance walk is the 90 mile Raad ny Faillan “Road of the gull” coastal foot-path. A strenuous hike and best walked in sections. You can get a walking guide from the Tourist Office, at the Sea Terminal building, which will give you more details about this walk and all the access points.

The Downside to Living on The Island

The first one that comes to mind is the weather; it doesn’t always play ball! Our island lies in the Gulf Stream, and our weather comes mainly from the south-west, which means the weather is mostly mild and wet.

On the upside, the crops grow, the island is green! We rarely ever have a hosepipe ban! (2018 was an exception to the rule – driest summer on record!)

Secondly, bearing in mind the fickle weather, getting on and off the island can be tricky. But, on the whole, we do alright!

The Benefits Living on The Island

The Isle of Man is a tax haven! I think this only applies to the top 5% of earners! The rest of us poor mortals,  pay taxes the same as everyone else. OK, the maximum income tax rate is only 20%.

I looked at my income difference between the Isle of Man and England and there isn’t much in it anymore, not like the old days. Besides that, the cost of living on the island is higher than in England. That just about wipes out the difference.

Start a Business on the Isle of Man

If you want to start your own business here on the island, it is a great place to be. Corporation Tax on the island is 0%. This only benefits a corporation that shows a profit. That said, I am building on online business working from home.

If everything goes to plan, then retirement, and taking time off when I please, to watch the TT, for example, the Isle of Man is the perfect place to run my business.

The Isle of Man has superfast broadband and the roll-out to homes across for island for optic fibre, giving up to 1Gb internet, makes this even better!

As you’ve arrived on my website, you’ll probably know by now that I’m a Baby Boomer and I’m into affiliate marketing. As far as affiliate partner schemes go, Amazon is by far, the biggest and easiest to start.

There you have it. Live on this little jewel in the Irish Sea, warmed by the Gulf Stream, working from home, with an online business, and being able to take time off whenever you feel inclined. What more could I ask?

The Isle of Man is a great place to live. If you are a Baby Boomer and love motorbikes, then you no longer need to ask what is the Isle of Man TT. Now you know! The bike races are like nothing else in this world!

Follow what I am doing and create the future that you desire. Start to build your very own rainbow; retirement never looked so good!

To find out more about building a long-term sustainable business around your passion, then click the Learn More button below and read my article on how I started an online business working from home.

Your retirement income isn't enough! Perhaps affiliate marketing is the answer. You don't want to work alone. How about an Affiliate Cooperative? If you've watched the video and you want to read...

Continue Reading
link to How To Make Money From A Free WordPress Blog - It’s Not Rocket Science!

It's all very well building a free WordPress website to blog to the world, but can you make money from a free WordPress Blog? I have wondered about this many times until I found people doing just...

As a Baby Boomer, I'm looking to supplement my income for my impending retirement. In this, my About Paul page, it allows me to introduce myself.

I realised several years ago that retirement wasn't going to be much fun unless I took steps to find a retirement income to support my family and me.